Most people land in Sicily at Falcone Borsellino Airport, Punta Raisi, about 35km west of Palermo, the capital of the island, as we did as well.  We stayed one night in Palermo and then headed to Taormina via Cefalu.  I liked Palermo, a lot, and I regretted we did not stay more than one night  but we had the hotels formerly reserved and had to move on, which was such a pity.

Palermo is a chaotic city in terms of traffic.  It is better to go by taxi from the airport to the hotel and then rent the car from the day you leave Palermo.

EUROSTARS CENTRALE PALACE Via Vittorio Emanuele 327  Very good option, in the heart of the historical center.

In Sicily you can enjoy the art of good cooking, food is serious matter and it shows. Fried street food is the Palermo specialty.

At noon you will find arancini, panelle, crocche and other delicacies at I Cuochini,  via Ruggero Settimo 68

La Cambusa Piazza Marina 16, Kalsa.  The Trattoria is located in Piazza Marina, one of the city’s historical piazzas. We had a great fresh fish and seafood for lunch at the terrace on a nice day of June.

Some people may tell you that there is nothing to see in Palermo.  I disagree. Palermo is fascinating to me because of its history and people. The history of Palermo dates back to the Prehistoric Age and in 734 BC  the Phoenicians established a merchant colony in the area. After this many different civilizations dominated the city until the Unification of Italy.

The two main streets in the city are Vittorio Emanuele and Via Maqueda. The main
shopping streets are Principe de Belmonte (pedestrian) via Libertà, via Roma and via Maqueda. Shoe and apparel stores are in Via Ruggero Settimo.

These are my recommendations for those who cannot spend more than two days in Palermo.

Cappella Palatina  A masterpiece of the Middle Ages

IL CAPO The best outdoor food market in Palermo.  It is an active every day market, making it possible to buy both food as well as other merchandise. It stretches along the via Carini and Beati Paoli, via di San’t Agostino and via Cappuccinelle. Nicer and more picturesque than the Vucciria Market.

QUATTRO QANTI  This Baroque square was placed at the intersection of Corso Vittorio Emanuele and Via Maqueda in 1620, dividing Palermo in four historic areas: Southwest, the Albergheria, with its tiny streets and baroque churches, Northwest Il Capo market, Northeast the Vucciria market and Southeast the Kalsa (Arabic)

The puppet theatre emerged in Sicily at the beginning of the nineteenth century achieving great success among the island’s working classes. The puppeteers told stories centered on knights and princesses based on medieval chivalric literature, Italian poems of the Renaissance, the lives of saints and tales of bandits.

TEATRO MASSIMO  Piazza Verdi.  Is the largest theatre in Italy and the third largest in Europe.  Take a look at the ticket offices outside the theater, each is a work of art. The best opera, ballet and other cultural activities take place  at this venue.

LA KALSA  The Arabs conquered Sicily in the ninth century AD leaving an indelible mark of their settlement. They entered Palermo through the Greeks Gate and founded the Kalsa. 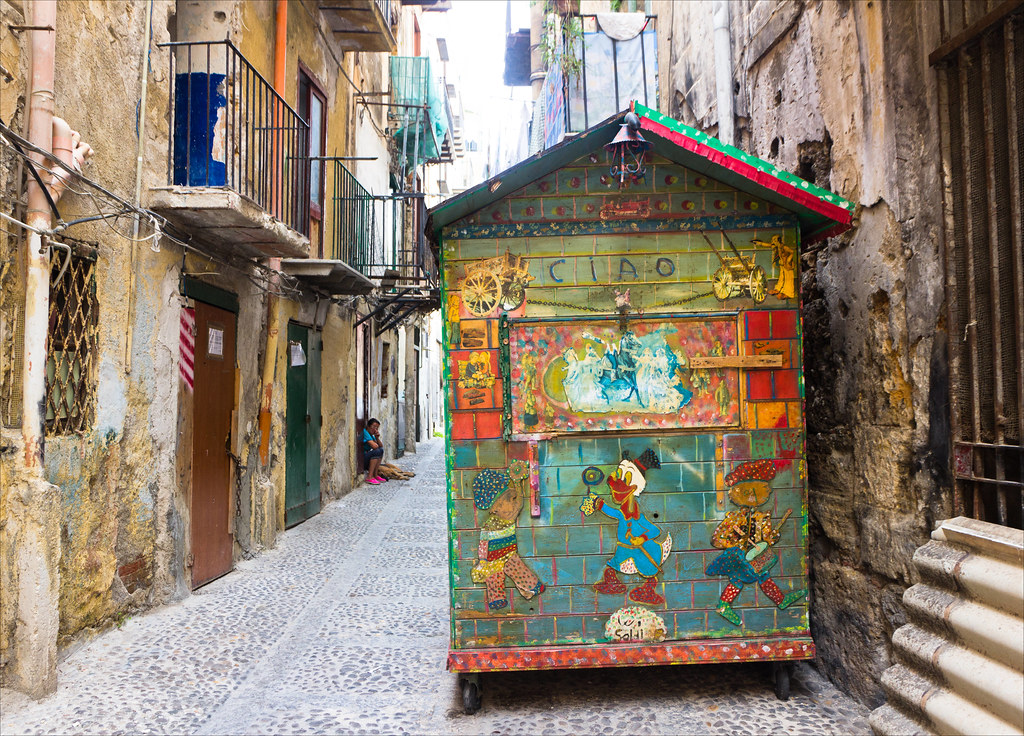 One thought on “PALERMO – SICILY”