Collioure  is a picturesque old villa, mixture of beach and stone buildings, a beautiful Catalan port next to the border with Spain. Named the “city of painters”, Collioure has always been an inspiration for artists, along the promenade you can see reproductions of paintings by Derain, Picasso, Matisse and Chagall. It was formerly a Roman village and in 981 the Countesses of Mallorca and Roussillon began planning a fortified city, between 1276 and 1344 the stunning Royal Castle of Collioure became their summer residence. Many exiles from the Spanish Revolution arrived in Collioure, including Antonio Machado and his mother.

The streets of El Moré, a former fishing and seafarers’ quarter, is a labyrinth of alleys and nooks connected by stairs, with restaurants and shops. It’s a small town, very easy to walk around. See the Castle, the marina, the beach of La Balette, the Church of Notre Dame des Anges. 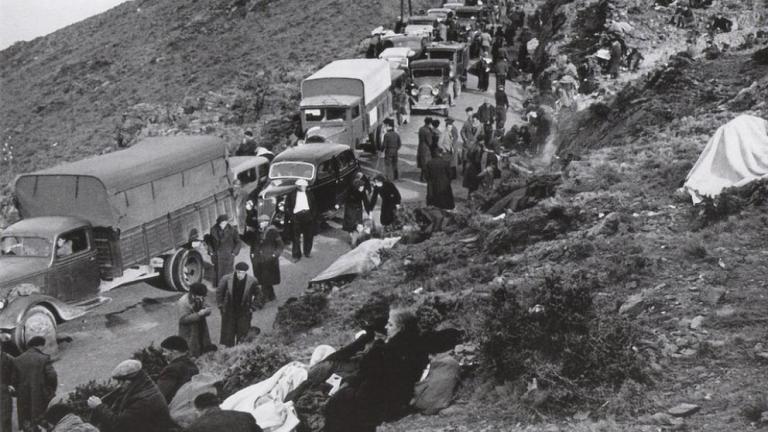 Republicans on their way to the French border Font https://khronoshistoria.com/antonio-machado-collioure/

This year the  French people of Collioure commemorate the 80th anniversary of the death of the Spanish poet Antonio Machado, who died in the exile in Collioure. This is a brief story of his exile. “At midnight on January 22, 1939, a friend’s car picked up the Machado family to take them to France fleeing the bombs. Machado was 63 years old and very ill. They crossed roads, cities and villages towards the border with France, five hundred meters before reaching Portbou, from where you can see the border, the drivers who transported them left them on the road in the open weather under the cold winter rain.  Their luggage was left in the vehicles and walking they reached the border where thousands and thousands of people were overwhelmed and without documentation,  Machado and his mother among them. He got a pass and reached Coilloure by train, the station official recommended the hotel where he himself stays: the HOTEL BOUGNOL-QUINTANA. In front of the hotel, there is a square and then a few meters away is the beach and the small fishing port.

An afternoon Machado came down to the living room with a small wooden box, a jeweler. He gave it to Pauline Quintana, the owner and friend, telling her:
– “This is the land of Spain. If I die in this town, I want to be buried with it.”
(Pauline kept the jeweler until she was 100 years old, when she died…)
On February 22, 1939, a month after arriving to Collioure Antonio fell into a coma and died. Three days later his mother died”

The Rue Antonio Machado crosses the town center where the cemetery is located. In the cemetery, next to his grave, there is a small mailbox (no larger than that of the mailboxes we all have in our house) where visitors like us deposit their messages. There are letters from all corners of the world written in various languages. They are sent to Correos of  Collioure: “To D. Antonio Machado, cemetery of Collioure, France” Every day the Antonio Machado Foundation sends a person to collect them. The song Cantares by Joan Manuel Serrat is a tribute to Antonio Machado, the song not only delivers in musicalized version the poem of Machado, but comments, highlighting that the poet had to go into exile and die away from his land “Murio el poeta lejos del hogar, lo cubre el polvo de un Pais vecino (“Died the poet away from home, covered by the dust of a neighbouring country”) 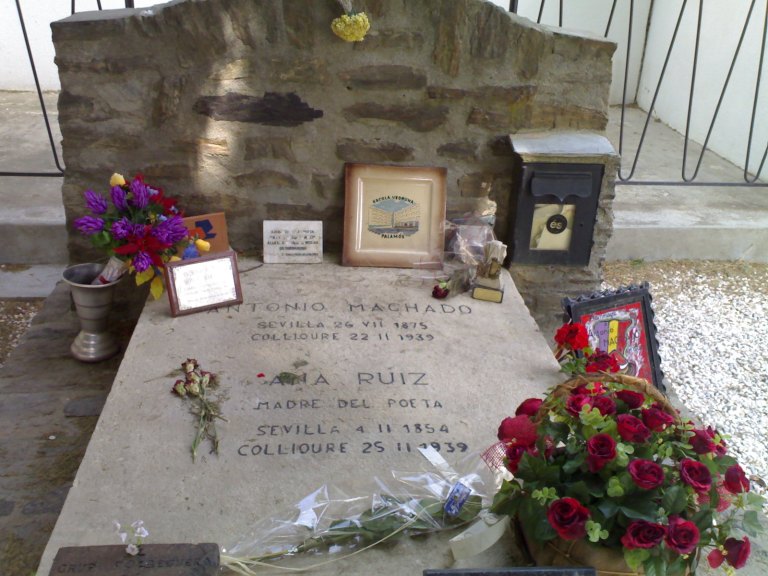 Grave of Antonio Machado in Collioure

Le Relais des Trois Mas. Four star hotel on the seafront with exceptional views over the bay of Collioure and a hundred meters from the historic center of the village of Collioure.

Casa Pairal A Relais du Silence hotel located in the heart of the city of Collioure.

The anchovy fishing tradition at Collioure dates back to the Middle Ages, when the village was also known for salting tuna. Collioure anchovies are prepared in three different ways: salted, in brine, or in oil

La Fregate Collioure Hotel Restaurant. 24 Avenue Camille Pelletan. La Frégate is also a Mediterranean restaurant that offers its guests authentic cuisine from the south of France and from the Roussillon terroir.

Paco bar a vin tapas 18 rue Rière  Located in a backstreet of Collioure, two blocks off the harbor.